Here you will find useful information about the breed and other details. 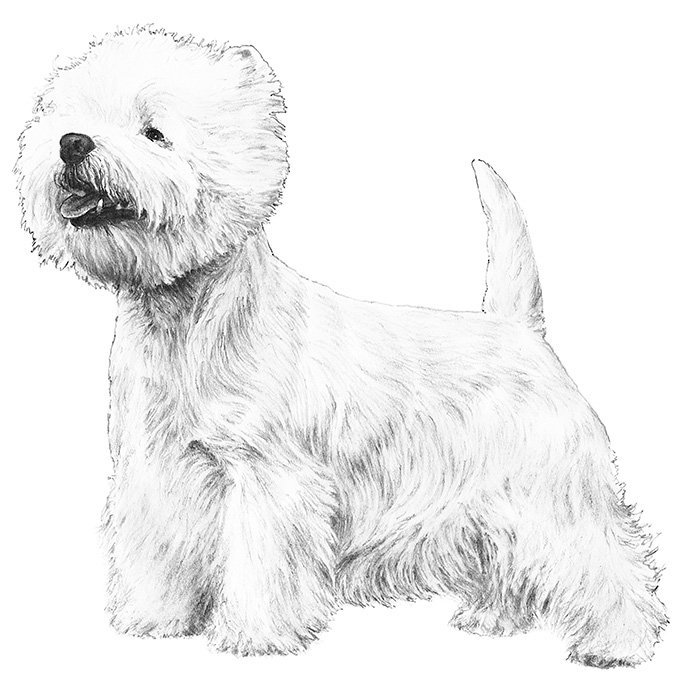 The importance of Pedigree

This is the breed standard accepted and applied in all types of contests.

Strongly built ; deep in chest and back ribs ; level back and powerful quarters on muscular legs and exhibiting in a marked degree a great combination of strength and activity.

Distance from occiput to eyes slightly greater than length of foreface. Head thickly coated with hair and carried at right angle or less to axis of neck. Head not to be carried in extended position.

Slightly domed ; when handled across forehead presents a smooth contour. Tapering very slightly from skull at level of ears to eyes.

Foreface gradually tapering from eye to muzzle. Not dished nor falling away quickly below eyes, where it is well made up.

Jaws strong and level. As broad between canine teeth as is consistent with varminty expression required. Teeth large for size of dog, with regular scissor bite, i. e. upper teeth closely overlapping the lower teeth and set square to the jaws.

Small, erect and carried firmly, terminating in sharp point, set neither too wide nor too close. Hair short and smooth (velvety), should not be cut. Free from any fringe at top. Round-pointed, broad, large or thick ears or too heavily coated with hair most undesirable.

Sufficiently long to allow proper set on of head required, muscular and gradually thickening towards base allowing neck to merge into nicely sloping shoulders.

Deep and ribs well arched in upper half presenting a flattish side appearance. Back ribs of considerable depth and distance from last rib of quarters as short as compatible with free movement of body.

12,5-15 cm (5 to 6 inches) long, covered with harsh hair, no
feathering, as straight as possible, carried jauntily, not gay or carried over back. A long tail undesirable, and on no account should tails be docked.

Well in, allowing foreleg to move freely, parallel to axis of body.

Very muscular and not too wide apart.

Bent and well set in under body so as to be fairly close to each other when standing or moving. Straight or weak hocks most undesirable.

Forefeet larger than hind, round, proportionate in size, strong, thickly padded and covered with short harsh hair. Hindfeet are smaller and thickly padded. Under surface of pads and all nails preferably black.

FAULTS : Any departure from the foregoing points should be considered a fault and the seriousness with which the fault should be regarded should be in exact proportion to its degree and its effect upon the health and welfare of the dog.

Any dog clearly showing physical or behavioural abnormalities shall be disqualified.